Only about 100,000 Americans visit Kenya each year.  That’s a shame, because we had a great time.

I get it, Kenya is really far away.  But 500,000 Americans went to Hong Kong last year, and that also is very far away.

I get it, there are scary diseases in Africa.  But, we are vaccinated against the worst ones, and most of Africa is actually disease free.  (This map is outdated, but still interesting.)

I get it, only 10% of Americans go abroad at all each year, and maybe you really want to get to London or Cancun or Tokyo with your hard-earned money.  Do that, too.

But, since we get to go to East Africa for this fellowship, we were thrilled to be tourists for a few days in Nairobi.

The most popular things to do in Kenya are about animals!

First, we watched some Elephant babies being fed at the David Sheldrick Wildlife Trust. 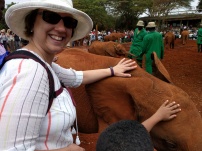 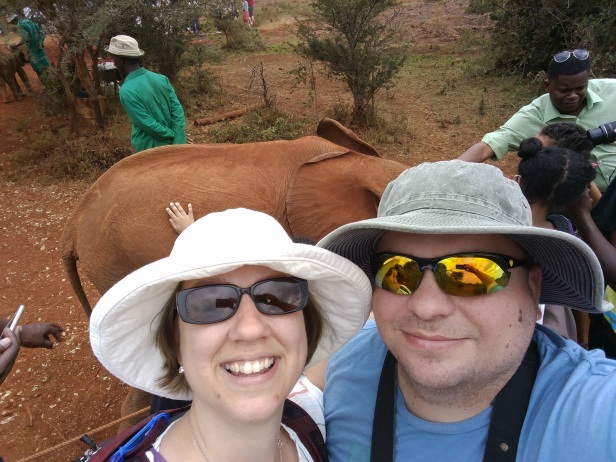 You can sponsor an elephant for just $50 a month.  These are all orphaned elephants – their mothers were killed for ivory or other reasons, and it can take up to 3 years for new elephants to adopt an unrelated child into their herd.  So, the caretakers raise them until they are about 5 years old, and then spend up to the next 3 years introducing them to mama elephants who might adopt them.  It’s like elephant foster-care.

Next, we got to feed some giraffes. at the Africa Fund for Endangered Wildlife center.

This center is designed to protect a particular species of Giraffe which was nearly extinct in 1979.  Now, there are a few hundred of them in national parks in Kenya.  These like to eat pellets, and you can feed them directly on their very slimy tongue.  They do not like to be petted, though.  Just fed 🙂

Around both the giraffes and the elephants were a few warthogs, eating scraps and not really bothering anyone.  (And not really caring if we took their pictures, either.)

Hakuna Matata (no worries), I guess!

After both of those fun, hands-on experiences, we also went to the Nairobi National Park.  If you have a driver or a car, you can do a three hour mini-safari, driving through the open park, where you can see wild animals with Kenya’s skyline in the background.

This isn’t our picture, btw.  It’s a promo from their website, and it’s all over Kenya.

Since we didn’t have a car, we walked through a different part of the National Park, specifically designed for walking groups to visit animals. 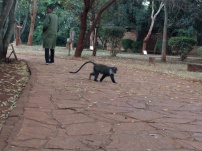 It was mainly a zoo, with too many silly monkeys, but it was amazing to see Kenya animals in Kenya!  We also had to duck under cover during some brief rain, and heard some Kenyans and Australians singing together.

Finally, after a long day of enjoying animals, David wanted to eat them.

I am not joking.

We went to a restaurant for tourists called Carnivore.

I am still not joking. 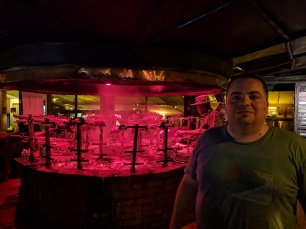 There is a huge barbecue in the center of the restaurant (see right picture, glowing red).  The servers bring huge sticks or platters of meat to each table and serve you whatever you’d like.  We tried pork, beef, chicken, turkey, lamb, rabbit, and ostrich; there were multiple kinds of a few types (we had 10 different meats).  Thankfully, no elephant or giraffe or monkey or zebra, as I had just seen each up close.

Seems I’m just as carnivorous as the other humans… I just prioritize by cuteness factor.

Even at the National Museum, we mainly enjoyed the wildlife.

We loved our time in Nairobi – but we didn’t super love the downtown.  It was crowded, like any major city, and there wasn’t much to see there.  We were then so glad that our Air b&b was an easy uber ride just a few minutes outside of the city center!

We finished our city tour with a very fancy meal at a former coffee plantation.  It was so fancy they wrote our names in chocolate on our dessert plates! 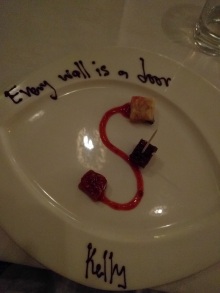 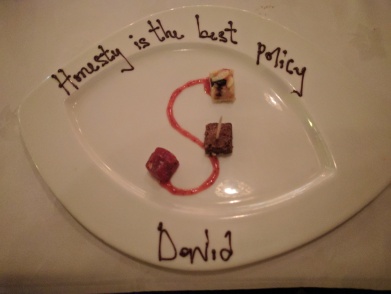 We had a great time in Nairobi, even though we didn’t get to other parts of Kenya.  If you like camping in the states, or even staying in wilderness cabins, there is a type of Safari for you.  But, city-folks as we are, we were happy with the weather, shopping, eating, and wildlife viewing we got to enjoy while we were there!