A story about a tiny plane, Lutheran school teachers, soccer teams, and the power of strong-willed women

Kakuma is in the far northwest corner of Kenya.  It is 76 miles from the nearest town, Lodwar, (which only has 50,000 people) and there are basically no roads from there.  This map will help: 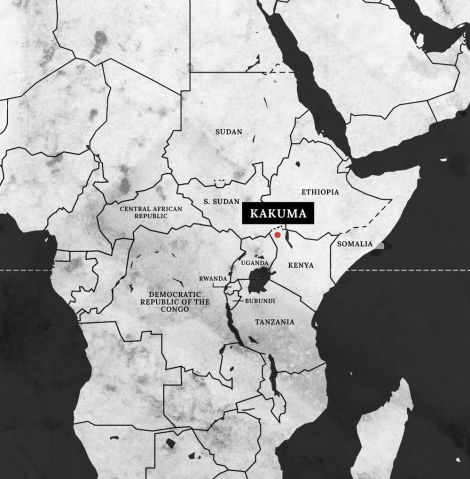 Thankfully, we did not have to drive 8+ hours from Nairobi, or even the 76 miles of non-road from Lodwar.  We were able to fly a UN plane from Nairobi directly to the Kakuma camp, thanks to the Lutheran World Federation, which works with the UN. 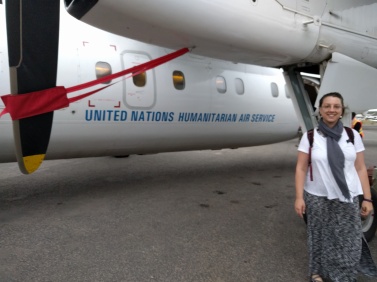 This is a tiny plane – room for about 30 people.  Only 8 of us were on the morning flight. But, it had hundreds of pounds of supplies:  parts for Toyota vehicles, medications in coolers, boxes stamped with international aid organizations’ logos. 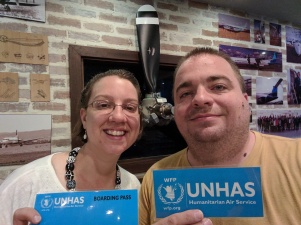 The reason that the UN runs a plane from Nairobi to Kakuma is because it is so large, and it has been there so long.  The camp is over 12 square miles, it houses over 200,000 people, and it has been there for 25 years.  Because the roads there are so difficult, it is often easier and cheaper to get workers and supplies in via plane.

This is the view from the road leading into the camp.  Lots of aid signs.

The camp was opened in 1992 to help with Sudanese refugees fleeing their war.  Now, the camp is about 50% Sudanese, 30% Congolese, and 20% other (mainly Ethiopian or Ugandan). Because it has been there so long, there are young adults who have lived their entire lives in the camp.  (Because of mountain ranges, Congolese can travel through Uganda to this camp, but Rwandans often have to stay in Uganda camps – check the map again, it will make a little sense, I promise!)

Camps are, by nature, incredibly boring.  The people are crammed into small tents, so there is no room to do anything inside.  There is a 6pm-6am curfew, when they aren’t allowed outside their tents.  There are no plots to farm, and no employers outside the camp which will hire them. This boredom perpetuates the hopelessness they already feel. Most people are suffering from PTSD from whatever trauma  they are fleeing; most have lost loved ones and many have seen their family members murdered in front of them.  Poor sanitation, malnutrition, and infectious diseases are rampant (as are too many pregnancies and miscarriages).  Fewer than 1% of refugees will ever be resettled to a stable country.  Kenya will not allow them to integrate into their country.  And, as long as the war continues in Sudan and Congo, they cannot go home.

Thanks to Lutheran World Federation, this camp is basically a small city.  It has shopping districts, schools, sanitation facilities, elected leaders, restaurants, and a soccer club.  (Check out more information about soccer and other fun facts in this article:  https://www.sbnation.com/a/kakuma)

Lutherans run 20+ schools with 90,000 students, including 2,000 children who were formerly homeless.

This man runs a school with over 2,000 primary students, including 60 with severe mental needs.  They run it with camp kids and town kids (refugees and residents) mixed together.  The students learn in English to take the exams to enter secondary school.  Lutheran World Federation donations cover school supplies, school lunches, special education teachers, and school uniforms for hundreds of those students every year.
Lutherans run elections in the camp, and empower male and female chiefs and elders to manage all minor disputes through democratic leadership.

I met with the chief, retired chief, and elders for one section of the camp.  Since 2014, ELCA donations have helped this team (with several staff and volunteers) manage 2,000 vulnerable children within the county (that includes areas outside of the camp).  These children were forced into child labor due to abandonment, abuse, or poverty.  The Lutherans worked with the elders to get the children enrolled in school, and help the parents to find work OR to help the children enroll in boarding schools/ orphanages.

Rose is one of the moms whose children were helped. (She is seated, in a red shirt)

Rose has 6 children, and she is pregnant again. Last year, none of her children were in school, because she couldn’t afford the fees.  Lutherans enrolled 4 of her children in school.  They gave her a micro-loan of $150, with which she opened the restaurant in which we are sitting for the picture.  She has space to feed maybe 10 people at once, and she works from 6am to 5pm to make tea, porrige, and beans and rice for the dozens of people who visit her restaurant.  When we visited, her children were home on summer break from school, and she was making them help her with the restaurant, so they learn the value of hard work (and they can use their math skills they learned!)

Literally, we changed her life.  She was completely hopeless last year.  Now, she hopes to build a second restaurant, and with her children to run both of them.  Oh, and by the way, she has malaria and she is pregnant, but she still managed to give us an interview during her busy lunch rush!

I didn’t get to see the teams while we were there, but the super cool article linked above gives lots of details.  Literally, the Lutheran World Federation makes it possible.

I know I’m bragging a little here, and I don’t mean to do that.  Of course, I didn’t actually do anything worth bragging about. The LWF did all the work, through their 300+ Kenyan employees and 2,000+ refugee employees who do the work in the camp every single day.

When you are able to make a small donation to Lutheran World Federation, please know that you’re making a difference.

I know most of you won’t get to visit with Mary, or the village elders, or the school teachers.  But your donation, your prayers, and your support makes their lives possible.  When we get to heaven, I’ll introduce you.  I’ll tell Mr. Paul, the headmaster, here is my friend, who paid for your students’ uniforms, and I’ll tell Mary, the restaurant owner, here is my friend, who prayed  for your restaurant, and I’ll tell the chief elders, here are my friends, who supported the missionaries who told you about Jesus and they will say, Thank you!  Because of you, my life was changed.  Because my life changed, I had hope again.  Because I had hope, I could hear God’s word healing me.  Because I was healed, I could change my world for peace.

Thank you, friend.  Thank you.