Moses was a Refugee

The Biblical story is one of people on the move.  Moses led the Hebrews out of Slavery into a refugee camp in the desert.  Today, Jews around the world celebrate “Passover” and remember the time when they were refugees.  Many Passover celebrations this year will include a direct connection to the current refugee crisis, like this example:

Some Temples are encouraging families to use the above PDF as part of their Passover celebrations at home (it’s several pages long, and can be found here).

Other temples are going further, and hosting a group Passover celebration:

(More information about that temple, here.) 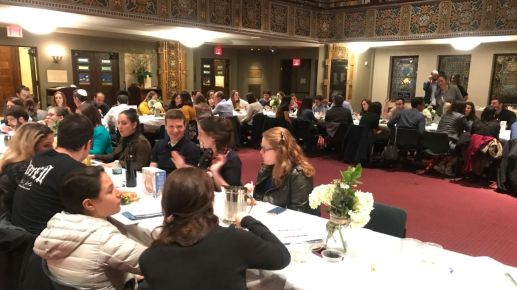 (More information about that Temple, here)

Christians in North America often take our freedom of religion for granted.  But our Jewish brothers and sisters annually remember their refugee history.  Jewish groups across the country resettle refugees in the US, and also advocate for more humanitarian responses to the refugee crisis.

So, this year, Jews around the US are adding a banana and a pineapple to their Passover Tables.  They’re putting empty shoes at the door, and inviting new neighbors to join.

As Christians also celebrate our Holy Week – even as some Christians are martyred for worshiping in their church – maybe we also need to remember our Refugee history.

You are no longer foreigners. You are citizens in the family of God.
– Ephesians 2:19

Jesus died for the sin of the whole world – the sin which causes wars and famines and refugee crises.  The sin which causes fear of refugees and resentment of immigrants.  Jesus’ rose again to create a new kingdom – one in which my adoption into God’s family is more important than my citizenship in a political regime.

How can my holy week reflect God’s ongoing work in the world – including the work with refugees, immigrants, and people on the move?