While we were in Texas, we crossed the border with papers.  But, we also met with refugees who are trying to receive asylum in the US, even without legal documents. 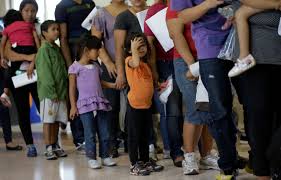 Almost all of those children and families are not “sneaking” across the border.  They are voluntarily turning themselves in to Border Patrol, who then either immediately deports them OR  turns them over to Immigration and Customs Enforcement (ICE).  If ICE believes that they have a potential Asylum Case, they can be released to family in the US.

But… how does that really work?

The interesting thing is the logistics of how.  Hundreds, maybe thousands of Central Americans were approaching US Border agents each day.  It might take a few hours, but likely a few days before their case can be sorted out. According to Saul, the Catholic Disaster Response director for the Rio Grande Valley, here’s basically what happens:

Sacred Heart Catholic Church is practically next door to the bus station.  So, Sister Norma – and Catholic Disaster Response – stepped up.  National Geographic did an article on this location a few years ago:  http://news.nationalgeographic.com/news/2014/08/140805-immigration-minors-youth-central-america-religion/

The main goal isn’t a political decision – it’s a humanitarian response.
When 400 people – mainly women and children –  are sitting in 100-degree heat outside your church, you might want to help them.

Lutheran Social Services – now called Upbring – is partnering with Sacred Heart Church and Catholic Disaster Relief to help people.  Literally thousands of individuals in the last 3 years.  We got to visit last week, and it was really interesting.  Check out my video with Upbring’s Kari Rogers:  (it’s 7 minutes long, but fascinating)

Catholic Charities Disaster Response can use donations – specifically of shoes, jeans, water bottles, and drawstring backpacks – and volunteer groups who can speak Spanish.

We saw first hand how this work is helping. People were given maps and explanations in Spanish as to how to use the bus to get to their families.  They had a chance to borrow a phone to call families and check in.  They got a meal, new clothes, hygiene items, and a shower.  Kids got bottles, diapers, and a chance to play.  Individuals met friends and were welcomed warmly by US volunteers.  All of that makes a difference.

If I am ever a refugee – I hope someone welcomes me like that.