Statistics are not a story

From the early stages of planning this adventure, I had been looking forward to spending time in Germany.  Knowing that the Lutheran Churches in Germany were significantly assisting in the refugee crisis, through evangelism,  humanitarian relief , and sanctuary, I was thrilled to meet with Lutheran pastors there.

The news about the European Refugee Crisis 2015 centered on Germany’s invitation to refugees.  Last year, the Prime Minister of Germany openly advertised that the country needed and wanted refugees – and that they would help them to find jobs, apartments, schools, and language training.

The country of 80 million Germans welcomed more than 1 million refugees last year alone, and has pledged to take in up to half a million more annually for the foreseeable future.

I promise to tell you more about the situation there tomorrow.  But first, one of the best stories we heard.

Thanks to a friend of a friend, I got to meet Pastor Jens Martin from Mainz, a town outside of Frankfurt.  This is his modern looking church building. 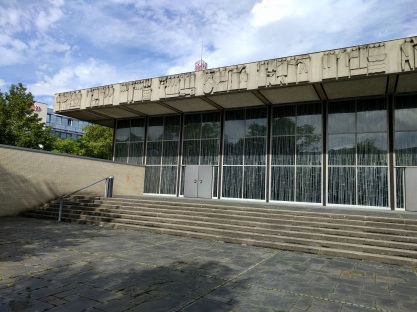 This church happens a few blocks away from two Refugee Shelters set up by the government.  The national government has determined that the town of Mainz (about the size of Ann Arbor) can handle 3,000 refugees.  The local town has converted two old school buildings into refugee shelters.  The classrooms have been turned into social work offices, medical clinics, and apartments.  They’re using the former locker rooms as shared bathrooms and laundry facilities.  There are playgrounds for the kids and the cafeteria has been turned into a sitting lounge for the adults.  (there are very limited cooking facilities, and no shared or provided meals).

When we were there, it was summer vacation for kids and adults.  A local group was doing a joint German-refugee summer day camp to help kids connect with one another.  It was a huge success, run largely by German volunteers who are pro-immigration, and very popular with all the kids who were getting bored by this point in the summer 🙂

Anita and her parents Shori and Omar.

When we arrived with Pastor Jens, the social workers assigned us a bilingual (Farsi-German) tour guide to show us around.  But, he had only been there 3 days himself, and was struggling to answer our questions.  Almost immediately, Omar came up and hugged Pastor Jens.  He could only speak farsi, but the guide translated to german, and pastor Jens translated to English.  🙂  Very flexible

Turns out, Omar and his family had just visited Pastor Jens’ Lutheran church the Sunday before, and he was eager to show his new pastor around his home.  He was also willing to share his story with us.

Omar was a florist and delivery man in Iran.  Shori was unable to find work.  They are Christians, and were facing persecution in Iran.  Shori’s uncle lives in Hamburg, Germany, so when the country opened its borders last year, they decided to take their chance.  Shori really wants to be a nurse in Germany, and she will have a chance to do that – Germany really needs nurses, and immigrants do a lot of basic nursing in Europe.  (It’s hard for women to have jobs in Iran.)

Since arriving in Germany 8 months ago, they’ve been transferred 4 times to 4 different camps/ shelters.  They are likely to receive official asylum in the country eventually, but they’re unable to work or take language classes until the paperwork comes through.  So they are very bored most days, trying to learn German via youtube videos and volunteer-led courses.

Each time the German government moves them, they walk to the closest church.
They are thrilled to raise their daughter in a country where she can live her faith.

If their asylum is approved, the government will provide them each with a basic social security payment (standard for all German residents) of about $300 per month per person, plus national health care, and a subsidized apartment.  Job training and English classes for the adults and public school for Anita are required also.  They are strongly encouraged to connect with the community – and being church members is the fastest way to do that.

Pastor Jens is baptizing at least 25 Farsi-speakers every year.  He isn’t even evangelizing in the camps – those are just the ones who are choosing to walk into his building and request asylum.

Their story is not the one we hear in the news.  The news is focused on Syrian refugees, and economic migrants, and young men traveling alone with no intention to integrate, and muslims who don’t wish to learn the language or culture of their host country.

This family was the kind that Germany must be thrilled to have. I hope that more of the stories are like theirs, and that more Germans are willing to look beyond the statistics to see the people whose lives are changed by radical hospitality.