This week we are at a Danish Church Camp for immigrants and refugees.  I had planned to come to learn more about how the Danish Folk Church (‘people’s church’) works with refugees.  I am learning a little about that, and I promise to share in another post, but mainly I am learning about the culture of Persia (modern-day Iran).  Michigan has almost no Persians/ Iranians, so even though I know a lot about immigration, I don’t know much about their stories.

In case your geography is as bad as mine, check out this map:

I think that this map is actually showing a tourist train route, but we can get the idea.  Iranians with  access to money or passports or transportation can fairly easily get into Turkey (or at least, they could in the past).  If they are able to get to Istanbul, they can take a boat to Greece or walk/train/fly into Europe.  Right now, Turkey & Europe are fighting over refugees and immigrants, but the reality changes almost monthly.

Most of the 100+ people at the camp this week have been persecuted
because of their Christian faith.

I was able to lead a Bible Study about the Old Testament Book of Daniel.  In this story, 4 Hebrews are captured by the Babylonians (modern-day Iraq) but given a chance at a student visa and permanent ‘security’ in Babylon.  Daniel & his friends keep to their Hebrew faith despite significant persecution.  They are refugees trying to keep their ‘true’ faith.

I tried to lead this study, asking if the lives of the modern-day refugees in the group are anything like Daniel’s story.  Their stories blew my mind. 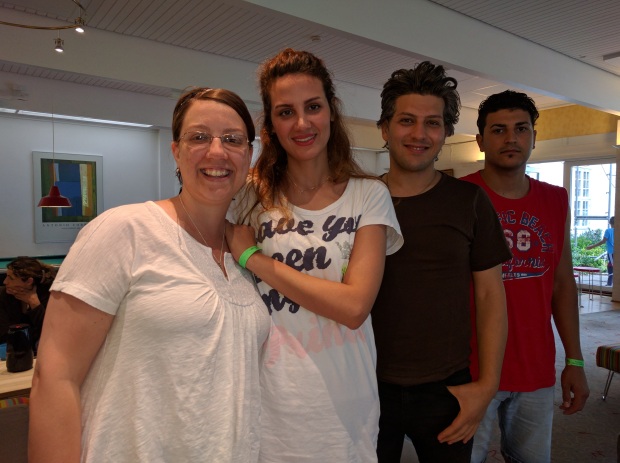 The three Persians in this picture (they don’t like to be called Iranian, because they have been persecuted by the current Iranian government) all fled to Europe out of fear for their lives.

Maria was a teacher, and one of her students’ families loaned her a Persian New Testament.  Once she read about Jesus, she could no longer morally teach the version of Islam that the current Iranian government forces her to teach.  She says she loved her students too much to teach them lies.  But if anyone found out she was a Christian, she would not only be fired, but she and her entire family could be executed.  She loves her father very much, but had to decide between her faith and her family.  She decided to come to Denmark 6 months ago.  Her paperwork is currently in limbo – she might get to stay, or she might be sent back.  She speaks English (studied at University) and wants to go to California to be a teacher.  But she will probably never see her family again.

Maria is at camp because it is a week of peace.  This is the first time she has been able to sing loudly, and speak in groups about her faith, and talk openly about
choosing Christ over safety.

The two boys in the photo have similar stories.  One of them was not really practicing Islam.  He didn’t read the Koran or go to prayers.  But he loves his mother and his sister and didn’t like the way the government told him to treat women as lesser citizens.  So he escaped to Europe for a new life, and on the road, he heard about Jesus.  Now, he is trying to learn more about this new faith, and live as a child of God.

The man on the left of this picture, in the plaid shirt, also shared his story with the whole camp.  He was a ‘business’ man in Iran – working with illegal sales of food and other items during the sanctions.  He said that he justified his rich lifestyle and crooked business deals as ‘helping’ the people who were suffering.  But then, his brother told him about Jesus.

Once Arash believed in Jesus, his entire life changed.  He could no longer participate in his shady/ unscrupulous business practices, but since everyone knew him as a crooked businessman, they wouldn’t hire him for a legitimate job.  Once his wife knew he was a Christian, she divorced him and turned his name into the government so he would be executed.  He escaped to Greece.

While in Greece, he met a friend at the camps, and they went to church together, and lived and worked in Greece for 2 years.  One day, another acquaintance told him, “you should go to Denmark”.  He didn’t want to go there, and he didn’t know anyone there, but he started to have dreams about Denmark, and the church prayed for him for a month.  Eventually, he felt that God was calling him to Denmark.  He arrived here 2 years ago.  When he first arrived, he was in detention center, and they took his wallet and phone and list of all his friends in Europe, so he didn’t have any way to call and ask for help from a friend.  He spent his time in Detention reading the Bible.

One day in Detention center, a Danish man came up to him and asked him in English, “are you reading the Bible?”  Aresh thought it was funny that a Dane and a Persian were having a conversation in English about a Jewish religion 😉 but eventually, he found out that the Danish man was a pastor in the Lutheran Apostolic Church of Denmark.

Aresh is now a member of that church, and leads the Persian-speaking refugee community at the church in the area.  He is a worship leader at our camp.  He can never return to Iran.  He will never see any of his family ever again.  He might not ever work full time again.  He might never have permanent papers again.  But he says that his life is better now that he has Jesus.

These aren’t the stories I thought I’d hear.  I thought I’d talk to Muslims and Christians about humanitarian aid in Europe and political struggles.  Instead, the Christians all want to talk about freedom in Christ, and their new life in Christ.  The Persian Christians want us to all know that they want their country to allow Christianity, because more of their family wants to be Christians, but aren’t strong enough to leave their country and live as refugees.

Pray for Iran, please.  Pray for my new friends Maria & Aresh.  Pray for the Danish people who are serving them.  Amen.